Review: Through The Ever Night by Veronica Rossi 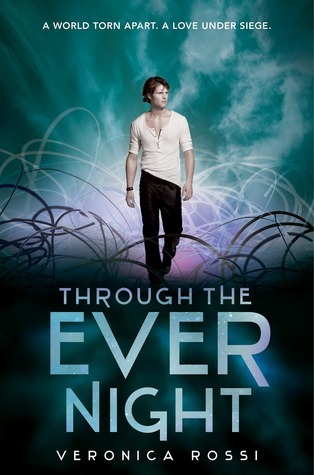 Through The Ever Night
Book two of Under The Never Sky
Written by Veronica Rossi
Pages:
Published:
Format Read: Ebook

It's been months since Aria last saw Perry. Months since Perry was named Blood Lord of the Tides, and Aria was charged with an impossible mission. Now, finally, they are about to be reunited. But their reunion is far from perfect. The Tides don't take kindly to Aria, a former Dweller. And with the worsening Aether storms threatening the tribe's precarious existence, Aria begins to fear that leaving Perry behind might be the only way to save them both.

So once again I absolutely loved this book. It was a great fast paced fun but dramatic book just like the first one. I had the whole day to my self so it was a one day reader for me which was nice cause iv been slumping a bit this month if i'm honest and I feel like this book god me back into it for the end of the month.

Aria is awesome in the sequel, she is a great fighter and a much stranger person compared to the last book where she was scared and in a new place. Now she has gotten used to it and has grown into herself. Shes not the only one who changed for the better tho, Perry is also bigger an better than what he was in the first book after becoming The new Blood Lord of the tribe. We also finally get to meet Liv, Perry's sister in this book which was cool. First impressions of her where bloody terrible she seemed like a horrible person but once she explains some reasons behind some things I really liked her.

I feel like the book had a really good ending to go in to the next one, You can kinda tell what the base of the plot is going to be but that's okay its not really a series of surprises. The ending of book two was really good, it was all hard times call for desperate measure but we are going to get though it, so in a way it was quite positive and optimistic.

If you loved the first book then you will love this one so if I was you I wouldn't hesitate to pick it up for ages like I did, I will hopefully finish this series off this month and I can tell it will go down as one of my favorite series of the year.

Email ThisBlogThis!Share to TwitterShare to FacebookShare to Pinterest
Labels: review

My name is Annabelle and i'm a green haired book nerd from New Zealand. I read a mix of Young Adult Fiction, Adult Fiction, Manga, Comics and Graphic Novels.